Posted by rikkesm on 20. November 2014
Posted in: Ikke kategoriseret.

Another great time with the epic Miss Alles ❤ 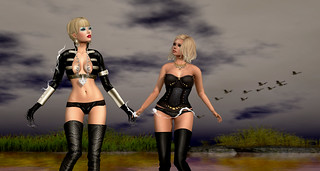 My dear friend RikkeBa is probably one of the sweetest people that I know in Second Life. So when I sent her message saying that I wanted to do a quick pic for two people and could I borrow her “body”, she hot-footed it over to the Sarawak SIM where I was set up.

In this picture we are actually using two separate poses and not a two-ball pose for friends. But because the individual poses are mirrors of each other in which we both have outstretched hands we were able to link up as though we are holding hands.

Our worn details are as follows:

Zaara : Banjara silver talisman necklace (breasts +) … made by Zaara Kohime. Purchased at the current round of…

Fantasy and roleplay fashion and storytelling by multiMuse.

Dolls and Demons
Gold Collars
Wtf Is She Wearing?

Smile, You are beautiful

...a sneak peak into my SL sparkling fantasy...

A look into my mind, sometimes good.sometimes bad

The Creative Concepts of Second Life

Bringing you the Wonderful World of Second Life Fashion, Home, Living and Music

Styles And Fashion Around Secondlife

Be Happy in sl's Blog

Loooking in SL every day for the best things to show!